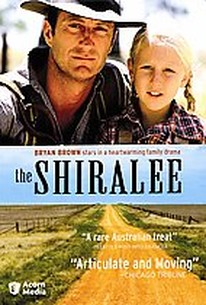 The 1988 Australian miniseries Shiralee was, like the 1957 film of the same name, based on a bestselling novel by D'Arcy Niland. A shiralee is Australian slang for the bundle carried about by a swagman (a tramp or thief). In this instance, the "bundle" is the 10-year-old daughter of an Australian migrant laborer whose wife has left him. The laborer then takes his daughter on a long, "bonding" trek through the Outback. The effortless expertise of Bryan Brown as the swagman is matched by little Rebecca Smart as his daughter. For its American public TV debut in 1991, The Shiralee was shown in its two-hour version, which was released theatrically in some areas as Macauley's Daughter.

Madeleine Blackwell
as Lucy
View All

Critic Reviews for The Shiralee

It's a magical little tale, quiet and introspective and deeply personal.

There are no featured reviews for The Shiralee at this time.