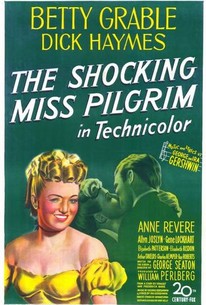 In this musical set in late 19th-century Boston, a suffragette secretary finds that her political beliefs are standing in the way of her romantic bliss with her beloved boss. Back then the notion of women's rights was considered scandalous and her lover will not stand for such nonsense in his office. Mayhem and music ensue until he is eventually convinced. Some of the tunes were composed by the late George Gershwin to which lyricists Kay Swift and Ira Gershwin added new words. These songs include: "For You, for Me, for Evermore," "Aren't You Glad We Did?," "Stand up and Fight," and "Waltz Me No Waltzes." Other songs include: "Changing My Tune," "Back Bay Polka," "One, Two, Three," "But Not in Boston," "Sweet Packard," "Waltzing Is Better Sitting Down," and "Demon Rum."

Stanley Prager
as Lookout in Office

There are no critic reviews yet for The Shocking Miss Pilgrim. Keep checking Rotten Tomatoes for updates!

There are no featured reviews for The Shocking Miss Pilgrim at this time.