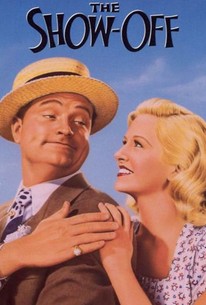 Previously filmed in 1926 and 1934, George Kelly's venerable stage comedy The Show-Off was dusted off as a Red Skelton vehicle in 1946. Skelton is well cast as Aubrey Piper, an inveterate braggart who sorely annoys the family of his wife Amy (Marilyn Maxwell). All talk but no action, Piper gets Amy's family involved in one foredoomed get-rich-quick scheme after another. Through a fluke, the show-off actually makes good towards the end, but though he realizes that he could never have done so without his wife's help he insists upon blowing his own horn well past the fadeout and "end" credits. Only Skelton's inherent likeability saves Aubrey Piper from being a thoroughly obnoxious blowhard. Featured in the cast of The Show-Off is Eddie "Rochester" Anderson, who is given surprisingly little to do.

Robert B. Williams
as Officer

Critic Reviews for The Show-Off

There's nothing to show-off about this unfunny obnoxious comedy-romance.

There are no featured reviews for The Show-Off at this time.