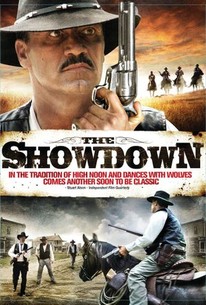 A U.S. marshal on a mission to reunite his family finds nothing but trouble after settling in a small Texas town. It's been years since U.S. Marshal Luke Canfield's ex-wife ran away from their Tennessee home, and it's beginning to look like he'll never see her nor his young son again. Defeated after years of searching, Luke begins a new life in the quiet town of Sand Prairie, accepting a job in law enforcement and falling for pretty saloon dancer Dixie Johnson. Trouble is, local villain Asa Brown has his eye on Dixie, too. Asa leads a violent gang of horse thieves, and the Sand Prairie locals live in mortal fear of his wrath. When Asa assaults Dixie, Luke sends him running from town in a hail of hot lead. Later, Canfield ventures out into the desert in search of Asa and his brothers, inadvertently putting Daisy and two young boys in danger as the unpredictable criminal plots bitter revenge.

Critic Reviews for The Showdown

There are no critic reviews yet for The Showdown. Keep checking Rotten Tomatoes for updates!

Audience Reviews for The Showdown

There are no featured audience reviews yet. Click the link below to see what others say about The Showdown!