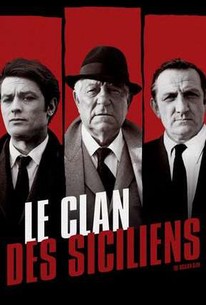 Roger Santet (Alain Delon) is a convicted murderer sprung from prison by the Sicilian clan headed by the aging Vittorio Manalese (Jean Gabin). They conspire to steal a large cache of jewels from an exhibit in Rome. As they are preparing for the heist, the mobster's American friend Tony Nicosia (Amedeo Nazzarri) suggests that a better way to get the rocks would be to hijack the transport plane while it is en route to New York. The dogged inspector Le Goff (Lino Ventura) is using all the available resources to thwart their plans. Though the heist itself is successful, Santet finds himself trapped by the mob because of his fling with Manalese's daughter-in-law (Irina Demick). ~ Yuri German, Rovi

Yves Brainville
as The Judge

Critic Reviews for The Sicilian Clan

As a heist thriller, it follows the conventions of the leading French film noir to the letter and in an vacuous way. [Full review in Spanish]

Fans of the cast should enjoy this internationally flavored workman-like heist flick from Henri Verneuil.

A fairly low-pressure thriller, by no means sparkling, but at least adequately solid and professional.

... a solid, tightly-directed heist thriller with continental style, international star power, and an ill-advised twist of vengeance that leaves no one untouched.

Audience Reviews for The Sicilian Clan

There are no featured audience reviews yet. Click the link below to see what others say about The Sicilian Clan!