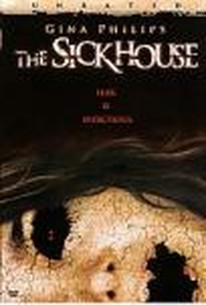 An archeologist excavating the site of a 17th Century plague hospital inadvertently unleashes the malevolent ghost of the notorious doctor who claimed countless lives 350 years prior. During the 17th Century, a plague was sweeping across the land and a twisted doctor was feeding on the misery of his patients. Centuries later, archeologist Anna has discovered the site of the hospital that the malevolent medico worked in. As the excavation gets underway, Anna becomes trapped in the darkened corridors with a group of trespassing teens. Unfortunately for everyone involved, the doctor is always on call, and eager to practice on some new patients. ~ Jason Buchanan, Rovi

Finlay Carr
as Baby
View All

Critic Reviews for The Sickhouse

What we get inThe Sickhouse is ninety minutes of people fumbling around in the dark waiting to die.

Audience Reviews for The Sickhouse

I liked the story and the weird twist but it's not that great to love this movie. The lighting was way too dark to understand what was going on. And it was a bit confusing. Not interested to watch it again to understand it though.

A descent horror movie made in the UK.

This film is absolutely terrible. It doesn't make any sense and you never know what the heck is going on. Their isn't enough dialogue in the film and nothing is ever explained. The camera work is shaky. Things happen for no reason. Most of the scenes are just unnecessary. The jumpiness of the film is both irritating and upsetting. The only half way decent part of the film is the ending, because that's when they finally tell you what is going on, but the whole time difference thing in my opinion was just an excuse not to give a real ending, because they realized their film was terrible. So don't bother wasting your time with this one, because it is not worth it at all.

3.5/10 Ironic how, as I am writing this review, I am making my very own home-made Plague Doctor Mask. You will get why this is ironic if you know what "The Sick House" is all about; and what its little premise deals with. I would say that "The Sick House", in terms of its story, is something for another day, but there's only one time for me to review this thing, and I guess I've got to do it now. The film is so damn far from good. It's a silly and ridiculous mess of a horror movie that deals with so many things, to the point where it doesn't even feel pretentious. Half of the time, the thing doesn't even try. However, to its credit, "The Sick House" is probably one of the most half-entertaining works in which little effort was put into anything, because the thing wasn't exactly unwatchable. It's standard Direct-to-Video horror-fare; nothing more, nothing less. The film concerns a College Student studying the Black Plague (or Black Death, if you prefer) and the artifacts that could be valuable (ones that could still be found if you looked).The woman is ambitious, and goes as far as to break into a Hospital to investigate and find something worth talking about. However, things are intensified when some other people break in; looking for something to hide. Not to mention a plague, and lots of ghostie Plague Doctors running about. The film has a story, but it's a real darn shitty one. The problem I have is that the film doesn't care about providing either a film or a good history lesson. It's just there; it was made, and by someone who obviously cared more about heavy metal music and gore than scares and atmospheric awesomeness. This film is a skip for many reasons, one of them being the confusing and lame plot; which starts out simplistic and decent, but descends into time-travel and stuff that we just don't give a damn about. The characters aren't worth sympathizing for; and neither is this film. I suppose what makes this film KIND OF entertaining at times is the production design, which for all its worth, isn't exactly god-awful. The Plague Doctors shown in the film look like uninspired crap, mind you, but at least they got the damn masks. I envy these filmmakers for that. The film is decently shot, without looking as bad as the thing, in its entirety, actually is. The thing about horror movies is, I like them scary. This movie was not scary. It was stupid and absurd; and not intentionally. A subject as fascinating as the Plague and Plague Doctors deserves a better movie, made by a better filmmaker, and with better actors. You can't create horror whilst trying to be disgusting and revolting, but with little complexions, on this kind of budget. Yes, it's low-budget horror, and yes, I didn't expect "The Sick House" to be the best thing ever. But you can do so much with an even lower budget, as was demonstrated in "The Texas Chainsaw Massacre" and "The Evil Dead", to name a few classic indie horror hits that have gone on to receive acclaim from fans of the genre. Those who truly admire horror movies for their artistic and horrific merit will not enjoy "The Sick House". Again; not the worst movie ever, but not one I'd say you have to rush to your nearest movie-rental store and grab. There's no reason why you should want a movie as shallow as this one that badly.