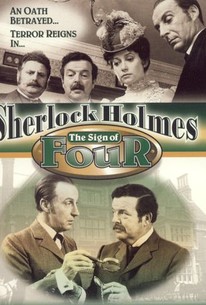 Matt Frewer stars as Sherlock Holmes in this made-for-TV mystery based on the novel by Sir Arthur Conan Doyle. Mary Morstan (Sophie Lorain) is a pretty young governess, whose father, serving as an officer with the British Army in India, vanished six years ago while returning to England. Each year on the anniversary of Captain Morstan's disappearance, Mary has received a small but expensive bit of jewelry from an anonymous benefactor, and when one year the gift is sent with a message requesting a meeting, Mary retains the services of detective Sherlock Holmes (Frewer) and his assistant Watson (Kenneth Welsh). Holmes discovers the gifts and the message were sent by Thaddeus Sholto (Marcel Jeannin), whose father served with Captain Morstan in India; while serving as guards at a prison, Major Sholto and Captain Morstan encountered a group of thieves who had stolen a fortune in jewels and murdered the owner. Sholto had the loot shipped back to his estate in England shortly before Morstan went missing, and when Sholto fell ill, he made his son promise to share the fortune with Morstan's daughter. However, now the jewels are gone, and Thaddeus' brother has been murdered, leaving Holmes and Watson to find the loot and the murderer before anyone else is killed. The Sign of Four was the fifth screen adaptation of Doyle's second novel.

There are no critic reviews yet for The Sign of Four. Keep checking Rotten Tomatoes for updates!

There are no featured reviews for The Sign of Four at this time.