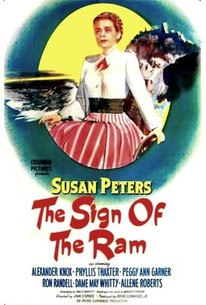 Susan Peters, a fine actress of the 1940s whose career was curtailed by an accident which left her wheelchair-bound, utilizes her handicap to her advantage in Sign of the Ram. Peters plays an invalid wife and mother who exercises dictatorial control over all around her. Peters' loved ones are willing to forgive her nastiness due to her condition--a fact that she realizes fully and exploits to the utmost. Eventually her atrocious behavior leaves Peters alone and friendless, but even in her darkest moments she insists upon being a "control freak" and engineers her own spectacular death. Far more tasteful than it sounds, Sign of the Ram was a worthwhile valedictory vehicle for Susan Peters, who died a few years after the film's release.

Dame May Whitty
as Clara Brastock

The static set and the lack of action made The Sign of the Ram seem more like a play.

Excellent performance from the ill fated Susan Peters is the centerpiece of this dark tale of a woman so consumed by insecurity and bitterness that she tries to destroy all around her. The actress crippled in real life after a terrible shooting accident tried to return to what had been a promising screen career with this film but it proved to be her last. Racked by almost constant pain she died four years later from complications and anorexia.