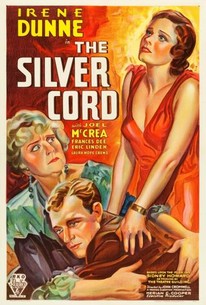 Sidney Howard's once-controversial play about the smothering aspects of Mother Love, The Silver Cord was filmed in 1933 with Laura Hope Crews recreating her stage role. Ms. Crews plays the outwardly selfless mother of Joel McCrea and Eric Linden; Irene Dunne and Frances Dee play the younger women in the lives of the two sons. Irene, an established physician, is quick to see that Ms. Crews' supposed loving relationship with her sons is an obsessive power trip, and that Mother is actually an emasculating monster who can't stand to have any other woman come between her and her offspring. Crews' steamroller tactics lead Frances Dee to attempt suicide, which results in the breakup of her relationship with Linden. Dunne, who loves McCrea and insists he stand on his own feet, is determined that Mother will exert her insidious influence no longer. She persuades McCrea to sever the "silver cord," leaving Crews alone with her weaker son Linden...a fate both richly deserve.

Critic Reviews for The Silver Cord

Laura Hope Crewes turns The Silver Cord into a good Minsky sketch, but there is some power in the writing, and a great deal of skill in Miss Dunne's performance.

There are no featured reviews for The Silver Cord at this time.