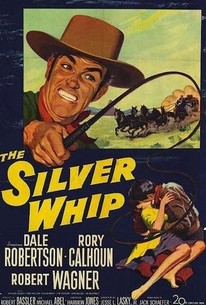 The Silver Whip stars Dale Robertson as Race Crim, the guard on a stage coach driven by his best friend, young Jess Harker (Robert Wagner). Wounded during a holdup, Crim vows to get even with bandit Slater (John Kellogg). Meanwhile, Harker, fired from his job as driver, manages to become the deputy for Sheriff Tom Davisson (Rory Calhoun). When the sheriff captures Slater and throws him in jail, a lynch mob, headed by Crim, converges upon the jailhouse. Harker is placed in a delicate dilemma: should he protect Slater and uphold justice, or should he allow his old friend Crim to satisfy his thirst for vengeance? The Silver Whip was based on a novel by Jack Schaefer. ~ Hal Erickson, Rovi

Cameron A. Grant
as Charles Hatt
View All

Critic Reviews for The Silver Whip

There are no featured reviews for The Silver Whip at this time.