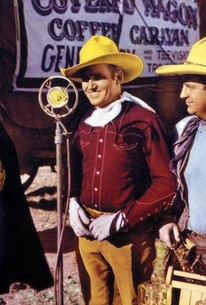 In this western, Gene Autry plays a cowboy with a heart as big as Texas who heads for the city to try to raise money so that a crippled little girl can get the operation she needs to walk again. First he talks a coffee company into being his sponsor. They opt to broadcast their performance on television, which had only recently been invented. Just as the performance is aired, there is trouble back at the ranch and the little girl finds herself trapped in a runaway wagon. Fortunately, the ranch hands rally to her rescue. Back in the city, the performance is a success and the girl is healed.

Critic Reviews for The Singing Cowboy

There are no critic reviews yet for The Singing Cowboy. Keep checking Rotten Tomatoes for updates!

Audience Reviews for The Singing Cowboy

There are no featured audience reviews yet. Click the link below to see what others say about The Singing Cowboy!