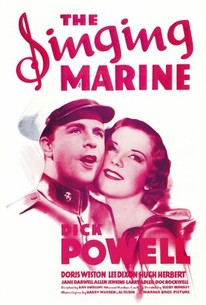 It was from this military musical that the US Marine Corps got it's signature anthem, "The Song of the Marines." The story chronicles the exploits of a young recruit who wins a radio contest and becomes an overnight singing sensation. Unfortunately, the sudden fame has caused a bad case of ego edema in the man and his Corps buddies begin to avoid him. Even his girl friend grows tired of his swaggering. Busby Berkeley staged the musical numbers. The songs include: "I Know Now," "'Cause My Baby Says It's So," "Night Over Shanghai," "The Lady Who Couldn't Be Kissed," "You Can't Run Away from Love Tonight." ~ Sandra Brennan, Rovi

Larry Adler
as Himself

Grace Hayle
as Fat Lady with Mob of Women

Frances Morris
as Girl at Phone

Jane Weir
as Girl at Phone

Critic Reviews for The Singing Marine

It's an old line, but this time it's strung with a lot of new talent.

There are no featured reviews for The Singing Marine at this time.