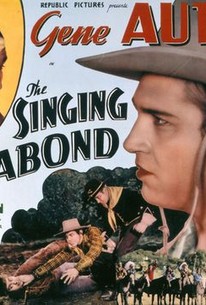 Ann Rutherford, who would later rise to fame in the Andy Hardy series at M-G-M and in a number of musical roles, made one of her first screen appearances in this Gene Autry musical western. Teenage runaway Lettie Morgan (Rutherford) stows away with a group of showgirls en route to California after an argument with her aunt. When the stagecoach is attacked near the California border, Capt. Tex Autry (Gene Autry) and his men save the day, but the petulant Lettie complains to his superior officers after Autry scolds the women for traveling through a dangerous area without a proper escort. This, coupled with the actions of rangers-gone-bad Buck LaCrosse (Warner Richmond) and Utah Joe (Alan Sears), leads many to suspect Autry has become a traitor, but when LaCrosse and Utah kidnap Lettie, Autry and his sidekick Frog (Smiley Burnette) are chosen to come to the rescue.

Bernard B. Ray
as Pvt. Hobbs

Critic Reviews for The Singing Vagabond

There are no critic reviews yet for The Singing Vagabond. Keep checking Rotten Tomatoes for updates!

There are no featured reviews for The Singing Vagabond at this time.