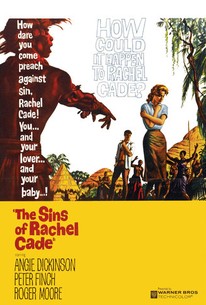 The Sins Of Rachel Cade Photos

Rachel Cade (Angie Dickinson), a dedicated American nurse working in the Belgian Congo, meets administrator Henri Derode (Peter Finch) during a native fertility dance. Guess what he tries to do? He doesn't, though, because Rachel falls in love with handsome downed RAF pilot Paul Wilton (Roger Moore). As Paul's wounds heal in the jungle hospital, he and Rachel manage to find quality time together. After he leaves, a pregnant Rachel turns to the previously rejected Henri for aid and comfort. After an hour or so of further melodramatic complications (including a native uprising), Rachel realizes that it was Henri she loved all along. A standard-issue soap opera from the Warner Bros. factory, The Sins of Rachel Cade was unobtrusively directed by the ubiquitous Gordon M. Douglas. Edward Anhalt adapted the screenplay from a novel by Charles E. Mercer.

Critic Reviews for The Sins Of Rachel Cade

Angie Dickinson is cruelly wasted in this sluggish, pretentious melodrama...

Audience Reviews for The Sins Of Rachel Cade

Soapy jungle set melodrama with a bit of a social conscience. Angie, who looks great, gives a good performance in the lead matched by Peter Finch as a military man who yearns for her. Mary Wickes has a small part that perks up the film whenever she appears which isn't nearly enough. Nice production values too.

The Sins Of Rachel Cade Quotes