The Six Wives of Henry Lefay2010 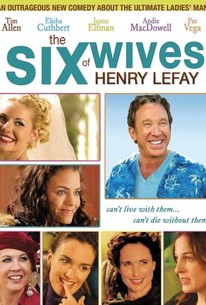 Following the unexpected death of her father Henry LeFay (Tim Allen), straight-laced daughter Barbara (Elisha Cuthbert) reluctantly returns to her familial roots in order to sort out her carefree dad's many, many messy affairs. What starts as a dignified funeral quickly descends into chaos as Henry's six former wives come out of the woodwork, each laying claim to various parts of the man who they all adored and reviled in equal measure. Heated jealousies, petty conflicts, and outright warfare are just some of the trials Barbara must endure as she tries to keep things in order, all while six very different women threaten to derail the proceedings. But as she discovers more about each of her dad's uniquely spirited wives, a greater picture of the man she refused to accept begins to take shape.

Lindsay Sloane
as Autumn
View All

Critic Reviews for The Six Wives of Henry Lefay

Shockingly inept from start to finish...

Part madcap comedy, part weepy funeral saga, the picture is a mess, hopelessly failing a colorful cast making an effort to lend the film some personality.

Audience Reviews for The Six Wives of Henry Lefay

This film will make anyone laugh. Its the first film in a very long time that I've seen Tim Allen appear in that's worth watching and funny. About a man who has been married six times or is it seven? Only Henry Lefay knows for sure. He relies on his daughter to get him out of his jams. This is a IFC film and one of the best I've seen. 4 1/2 Stars

I enjoyed this movie. I thought it was witty, sweet, and quite fun. It was entertaining, but not the usual Tim Allen fall down hysterical movie. The wives for me were the real talent. Be prepared to hang in there until the end, and you will get your warm and fuzzy :-)

Cast: Elisha Cuthbert, Tim Allen, Eric Christian Olsen, Jenna Elfman, Jenna Dewan, Lindsay Sloane, Paz Vega, Andie MacDowell, Kelli Garner, Chris Klein, Edward Herrmann, S. Epatha Merkerson Director: Howard Michael Gould Summary: After salesman Henry Lefay (Tim Allen) disappears while skydiving and is presumed dead, his grieving daughter (Elisha Cuthbert) begins to make funeral arrangements, a process made tricky when his current wife and five exes descend and wage a fierce power struggle over the burial. My Thoughts: "I enjoy Tim Allen's films, no matter how funny or un-funny they are. Elisha Cuthbert was likeable, and I enjoyed her character. The exes are great. Jenna Elfman really plays a crazy ex. She was lots of fun. Barbara Barrie plays the sometimes forgetful, hard hearing grandma, who, if I may add, has a bit of a slutty past. It's just a fun comedy, nothing to take to serious. Not an LOL kind of film, but it'll make you smile. It's quirky with a few twists. It won't be to everyone's liking."