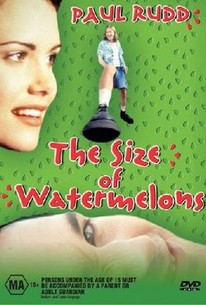 Alex, an undergraduate art student at a California school, attempts to find meaning and purpose in his life in this satirical Canadian comedy-drama. He decides that the only way to accomplish this is to become a filmmaker. Unfortunately he has no inspiration as to a subject matter until he looks closely at his fringe-dwelling buddy Gnome, a Venice Beach comic-book store owner who considers every aspect of life a political cause to fight against. Gnome is truly a bizarre character and the perfect subject for a film. Now that Alex has a subject, he needs the cash to make his film. Helpful Gnome grabs his life-savings and heads off to Vegas to win some cash for his friend, leaving Alex and his pals to race after him before he destroys his life. During the chase, Alex finds himself falling for punk-rocker Maggie. ~ Sandra Brennan, Rovi

Critic Reviews for The Size of Watermelons

There are no critic reviews yet for The Size of Watermelons. Keep checking Rotten Tomatoes for updates!

There are no featured reviews for The Size of Watermelons at this time.

The Size of Watermelons Quotes