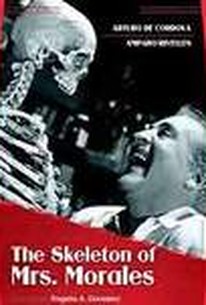 Based on a story by the late 19th and early 20th-century fantasy and horror writer Arthur Machen, this adapted tale plays upon the magical, "brujo" components of Latin American culture that resonate with Machen's favorite themes. An apparently decent but very suspicious Dr. Morales (Arturo de Cordova) is accused by the police of murdering his wife (Amparo Rivelles), characterized as a "demon in skirts." Was there some sort of dark side to Mrs. Morales? Is her husband a killer? Orthodox religion comes under a harsh scrutiny in this suspenseful tale of mystery and crime. ~ Eleanor Mannikka, Rovi

There are no critic reviews yet for El Esqueleto de la Señora Morales (Skeleton of Mrs. Morales). Keep checking Rotten Tomatoes for updates!