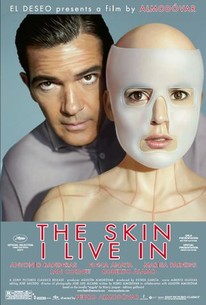 Critics Consensus: The Skin I Live In lacks Almodovar's famously charged romance, replaced with a wonderfully bizarre and unpredictable detour into arthouse ick.

Critics Consensus: The Skin I Live In lacks Almodovar's famously charged romance, replaced with a wonderfully bizarre and unpredictable detour into arthouse ick.

Critic Consensus: The Skin I Live In lacks Almodovar's famously charged romance, replaced with a wonderfully bizarre and unpredictable detour into arthouse ick.

The Skin I Live In Photos

Ever since his wife was burned in a car crash, Dr. Robert Ledgard, an eminent plastic surgeon, has been interested in creating a new skin with which he could have saved her. After twelve years, he manages to cultivate a skin that is a real shield against every assault. In addition to years of study and experimentation, Robert needed a further three things: no scruples, an accomplice and a human guinea pig. Scruples were never a problem. Marilia, the woman who looked after him from the day he was born, is his most faithful accomplice. And as for the human guinea pig...-- (C) Sony

José Luis Gómez
as President of the Biotechnology Institute
View All

News & Interviews for The Skin I Live In

View All The Skin I Live In News

Critic Reviews for The Skin I Live In

Banderas settles into the dark character of Dr. Ledgard with a stillness and apparent ease that gave me the chills I left the movie theater wondering if it worth it.

The Skin I Live In is well worth seeing. Mad scientists overwhelmed by hubris are nothing new but no iteration of the story has been told in quite this way.

Almodóvar has a body of work as rigorously personal as any out there, and, even with its flaws, he wears this latest Skin rather well.

Despite the typically invigorating sense of line and framing, The Skin I Live In withholds the director's customary satisfactions and affirmations. The result is a saga of obsession that, in its saturnine undertone, maintains a hard-to-enjoy integrity.

Even a second level Almodovar is better than most other people.

Few filmmakers are more assured or alluring, even when we fear we're following a monster.

An objectively oddball piece of work...

The Skin I Live In is the most disquieting film I've seen in years. Don't let that stop you from seeing it, though. It's also the masterpiece we've long awaited from Pedro Almodovar.

"The Skin I Live In" is a film where love takes many forms, some of which are perverse, but it's how the director is guided by his one for cinema that makes his latest feel so alive.

The Skin I Live In is a definite must-see, as all its elements harmoniously blend to create a cinematic masterpiece that stands out not just this year, but over the course of the past decade.

Audience Reviews for The Skin I Live In

Almodóvar's incursion into psychological horror is this fascinating, extremely disturbing and even terrifying story about insanity, desire and obsession that grabbed me from the first scene to the last - and the best way to see it is without knowing anything about it.

A surgeon works on skin replacement for a woman that he mysteriously keeps locked in his house. Pedro Almodovar has always made weird films that challenge traditional conceptions of sexuality and gender with multiple, intersecting characters, but what has been his weakness in my view was the degree to which the stories interconnect to form a fluid narrative or consistent theme. The Skin I Live In is his best film because it has a fantastic, fluid narrative that unfolds deftly. It's full of surprises and the twists come logically and unexpectedly. Disturbing to the core, Almodovar once again seeks to problematize traditional points of view. What's more, I loved his use of "show" details -- actions that characters perform that tell us about their inner life -- and when Robert's daughter climbs in the closet, I couldn't think of a better way to show her devastation. Antonio Banderas is at his best, evil -- staring over his eyebrows -- when he needs to be and even charming at times, and one of my favorite Spanish actresses, Elena Anaya, gives an astounding performance. Overall, if you only see one Almodovar film, make it this one -- just don't bring your sensibilities or the children.

The women of Almodovar! Mesmerising.. All the ingredients of a typical Almodovar are present. Those who've seen some of his movies will know what I mean.

Pedro Almodóvar has always been a twisted individual. This is a filmmaker that had destitute nuns, sex addicts, mothers trading their sons to pay dental bills, someone who changes sex to have a sexual relationship with her father, among many others. So "La Piel que Habito (The Skin I Live In)" should be no surprise to anyone who's witnessed Almodóvar's amazing career. What's different about "The Skin I Live In" is that while his prior films always had at least an ounce of humor (some more slapstick "Women on the Verge of a Nervous Breakdown", some more subtle and satiric "Volver" and "All About My Mother"), "Skin is pure physiological horror. It's Almodóvar by way of Hitchcock or Argento. And it's a testament to his maturity as a filmmaker that he makes it work. "Skin" is about a grieving plastic surgeon who after 12 years has managed to cultivate a skin that is a shield against any element. The film centers around his relationship with his human guinea pig and how this relationship is affected by the personal losses he's experienced in his life (his wife and daughter). How this psychologically plays out goes into icky territory but it wonderfully twisted and bizarre. You will be rapt by this mental exploration, not only of the God complex doctor but of his guinea pig patient and his motherly accomplice. "Skin" reunites Almodóvar with one of his original, and probably only, male muse Antonio Banderas - and it does wonders for Banderas. He hasn't been this good in a live action film since the 1990s. Almodóvar understands Banderas gifts and allows his to use his penetrating eyes with menace. To pull off such a bizarre story Almodóvar knows he needs a strong cast to make it convincing so he relies on his frequent collaborator Marisa Paredes and the alluring Elena Anaya ("Talk to Her") to help round out this insane trio. But the film belongs to Almodóvar. Despite the darkness of the story he still brings his unique storytelling style to the forefront. His wonderful ear for fluid dialogue and impeccable eye for perfectly framing a scene manages to add to tense, claustrophobic feel of "The Skin I Live In". Despite the film taking some time to find its rhythm, the moment it settles in and grabs you, it doesn't let go. "The Skin I Live In" may not be one of his classics, but it's a great addition to the imaginative world Pedro Almodóvar has created over the last 30 years.

The Skin I Live In Quotes