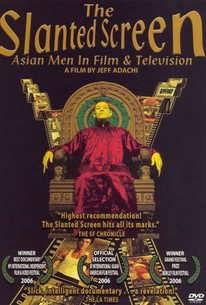 Filmmaker Jeff Adachi turns his critical lens on Hollywood in order to highlight the dangerous but seldom explored reality of cinematic prejudice. With fifty film clips spanning a century on the silver screen, Adachi chronicles the experiences of Asian men in American cinema. From ethnic stereotypes to the limited roles available to talented Asian actors, this look at a highly visible form of racism reveals just how much damage can be done by the image making machine in Hollywood.

Critic Reviews for The Slanted Screen

Entertaining, its concerns are current and it may empower viewers in its target community.

Provides a serviceable if uninspired companion piece to The Celluloid Closet and other overviews of minority (mis-)representation.

Too sloppy to make any genuine impact.

Audience Reviews for The Slanted Screen

There are several documentaries like this about racial stereotyping in Hollywood on the streaming service Kanopy. This documentary was released in 2006, the same year Mako died, whose screen interview time is fairly significant, In 2006 Bobby Lee of MadTV was perhaps the youngest up-and-coming talent interviewed. Filmmaker Jeff Adachi goes all the way back to the silent era to begin and I found the information about Japanese silent star Sessue Hayakawa fascinating. Again there is anger from these Asian men at the injustice of racism and stereotypes in the film industry, but many are working to make a change so there is hope for the future.