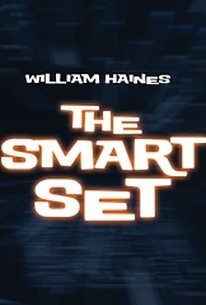 Having played an egotistical baseball player in Slide, Kelly, Slide, an egotistical golfer in Spring Fever, and an egotistical football star in West Point, can it be any surprise that William Haines was cast as a you-know-what polo player in The Smart Set? While touring Europe, Tommy van Buren (Haines) is expelled from the U.S. polo team because of his obnoxiousness and lack of team spirit. Since even his sweetheart Polly (Alice Day) has turned her back on him, the headstrong Tommy decides to just sit back and sulk during the championship match. But when Polly is injured in a riding accident, our hero returns to the team just in time to trounce the British polo squad -- and, lest we forget, he also wins the heroine. As usual, critics gnashed their teeth over the sameness of the Bill Haines vehicles, but the public turned out in droves.

Hobart Bosworth
as Durant
View All

Critic Reviews for The Smart Set

There are no critic reviews yet for The Smart Set. Keep checking Rotten Tomatoes for updates!

Audience Reviews for The Smart Set

There are no featured audience reviews yet. Click the link below to see what others say about The Smart Set!