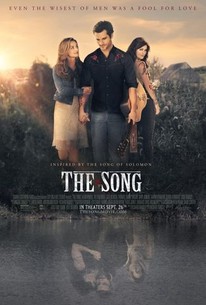 THE SONG follows aspiring singer-songwriter Jed King (Alan Powell, Anthem Lights lead singer) as he struggles to catch a break and escape the long shadow of his father, a country music legend. After reluctantly accepting a gig at a local vineyard harvest festival, Jed is lovestruck by the vineyard owner's daughter, Rose (Ali Faulkner, TWILIGHT: BREAKING DAWN), and a romance quickly blooms. Soon after their wedding, Jed writes Rose "The Song," which becomes a breakout hit. Thrust into a life of stardom and a world of temptation in the form of fellow performer Shelby Bale (Caitlin Nicol- Thomas, "Nashville"), Jed's life and marriage begin to fall apart. (C) Samuel Goldwyn

Critic Reviews for The Song

With its strong performances, musical and otherwise, this romantic melodrama is many cuts above the faith-based norm.

The performances are uniformly fine, which keeps things involving. Powell, in particular, is terrific.

A faith-based parable that draws from the Bible as much as it does from every perils-of-showbiz cliché in the book.

If wisdom isn't one of your character's defining traits, should Solomon really be your model?

A ceaseless, hurtin' tune of a music-driven romantic drama, "The Song" plays out its tired refrain with all the subtlety of a Sunday sermon.

The actors, none of whom have much experience, are quite convincing, but the story - Jed falls, then sees the error of his ways - is an oft-told one.

...ultimately fails as a crossover evangelism tool in that it's hard to imagine it even grazing the heathen consciousness. But the choir will no doubt enjoy parts of it.

The Song starts like some of its clunkier faith-based predecessors. We soon learn it boasts both fine music and a sense of how temptation can rock even a strong marriage.

Watching The Song is like listening to rock music on a religious station; you think, "Not bad for Christian radio."

Normally, you can't lose with good material. Although "The Song" has plenty of sincerity and decent tunes going for it, it slips away from its message when it strays too far from its source: the Old Testament's Song of Solomon.

Press materials for The Song describe it as "the sexiest faith-based movie ever." While that's technically true, it's also an incredibly low bar to clear. The film is completely generic and doggedly formulaic.

Audience Reviews for The Song

There are no featured audience reviews yet. Click the link below to see what others say about The Song!