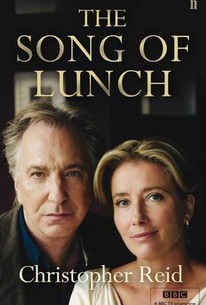 The Song of Lunch Photos

This hour-long installment of the PBS series Masterpiece Contemporary stars Emma Thompson and Alan Rickman, and constitutes an adaptation of Christopher Reid's narrative poem of the same title. Like its source material, the film follows the saga of a nameless book editor (Rickman), meeting his ex-girlfriend (Thompson) a decade and a half after their initial break-up. They join one another for a nostalgic lunch at a chic SoHo restaurant that figured prominently into their relationship; she has become the society wife of a French writer, and now resides in Paris; he, on the other hand, has failed as a belletrist, fell into a mundane, unsatisfying publishing job, and pines for the loss of the love affair. Day in and day out, it seems, he can't shake his feelings of resentment and hostility about aging. Though the reunion begins peacefully and amicably, it soon descends and degenerates into a vitriolic parade of insults and accusations. This marked the first reunion of Thompson and Rickman since their roles as husband and wife in the 2003 romantic comedy Love Actually. ~ Nathan Southern, Rovi

Critic Reviews for The Song of Lunch

There are no critic reviews yet for The Song of Lunch. Keep checking Rotten Tomatoes for updates!

Audience Reviews for The Song of Lunch

This one was full of surprises, but sadly, few of them were good ones. At least at 50 minutes duration, the pain did not last long, but even so, it seemed longer than its running length. A BBC TV production means of course impeccable production values and I am normally a huge fan of Alan Rickman and Emma Thompson. It was the story and the presentation that were lacking. Most of the film consisted of a voice over narration of what was going though his mind through the course of the encounter. Very little action can still be engrossing if the conversation sparkles. The description of this calls it a poetic monologue. I call it pretentious prattle. I will give it three stars, but only because of Emma. Without her it would have been an unmitigated disaster.

Not your typical film but interesting. A bittersweet tale of lost love. Nice to see Rickman and Thompson working together again.

The Song of Lunch Quotes