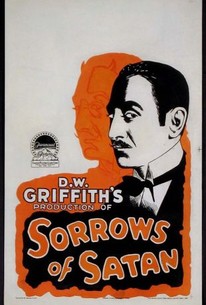 The Sorrows of Satan Photos

When a struggling literary critic and a writer fall in love with each other, the writer is unable to deal with his rejection by publishers and the attendant poverty he is forced to live in. He decides to put an end to it all and Satan appears to him in a disguise, making him an offer which he accepts and which makes him a part of the upper crust of London society. When he discovers who he has been dealing with, he tries to recover his own life. A rather surreal and visually pleasing drama.

Marcia Harris
as The Landlady

Nellie Savage
as The Dancer

Critic Reviews for The Sorrows of Satan

All this is undoubtedly effective as far as it goes.

Sorrows of Satan has the sense of vastness, chaos, originality, and sudden interludes of unimagined beauty that make Griffith so much akin, in his present stage, to Walt Whitman, the poet.

[Griffith] has made some of the most flagrantly bad scenes that it has ever been my ill luck to witness; he has made other scenes of startling power.

There are no featured reviews for The Sorrows of Satan at this time.

The Sorrows of Satan Quotes