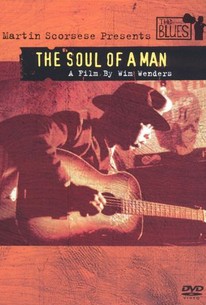 Part of The Blues documentary series on PBS, The Soul of a Man is written and directed by Wim Wenders and narrated by Laurence Fishburne. This installment explores the work of the filmmaker's personal musical heroes: Skip James, Blind Willie Johnson, and J.B. Lenoir. Through reenactments and archive footage, Wenders tells the personal stories of these highly influential and often underappreciated artists. Their musical legacy is interpreted through live performances by contemporary musicians like Bonnie Raitt, Cassandra Wilson, Lou Reed, Nick Cave, Lucinda Williams, Beck, and the Jon Spencer Blues Explosion. He also incorporates rare clips from two 16 mm films shot during the '60s by Steve and Rönnog Seaberg. The Soul of a Man was originally broadcast by PBS on September 29, 2003.

Critic Reviews for The Soul of a Man

There are no critic reviews yet for The Soul of a Man. Keep checking Rotten Tomatoes for updates!

There are no featured reviews for The Soul of a Man at this time.

The Soul of a Man Quotes