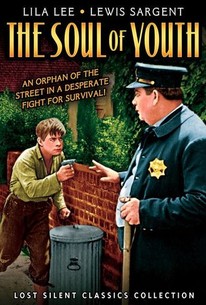 After directing him as the title character in Huckleberry Finn, William Desmond Taylor again used boy actor Lewis Sargent in this picture. His character, known merely as "the boy," has been raised in an orphanage where he has caused as much trouble as possible. He finally can't stand living there anymore and runs away. On the streets he finds a friend in Mike (Ernest Butterworth), a newsboy. Mike teaches him how to survive but inevitably the boy gets hauled into court. However, the judge sees potential in him and hands him over to be adopted by a young politician. The judge, incidentally, is played by Judge Ben Lindsey, who was famous in his day for his efforts to give delinquent boys a decent chance in life.

Lewis Sargent
as The Boy

Betty Schade
as Maggie
View All

Critic Reviews for The Soul of Youth

Vivid silent about a feisty, abandoned orphan and his coping with society, mixes entertaining storytelling, good visuals and social comment.

There are no featured reviews for The Soul of Youth at this time.

The Soul of Youth Quotes