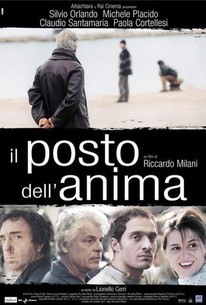 Italian filmmaker directs Il Posto Dell'Anima (The Soul's Place), a drama about a group of dedicated union workers. Set in the small mountain town of Campolaro, the film follows Carair tire factory co-workers Salvatore (Michele Placido), Antonio (Silvio Orlando), and Mario (Claudio Santamaria). When the American-owned company threatens to shut down the factory, the union members organize a serious protest. While the boisterous men chain themselves to the factory doors and get arrested on television to show their solidarity, their long-suffering wives raise money by starting up a homemade pasta business. After several attempts of raising awareness and funds, the union sends a representative to the U.S. to talk to the president of Carair. The Soul's Place was shown in competition at the 2003 Montreal World Film Festival. ~ Andrea LeVasseur, Rovi

There are no critic reviews yet for The Soul's Haven (The Soul's Place) (Il posto dell'anima). Keep checking Rotten Tomatoes for updates!

There are no featured reviews for The Soul's Haven (The Soul's Place) (Il posto dell'anima) at this time.