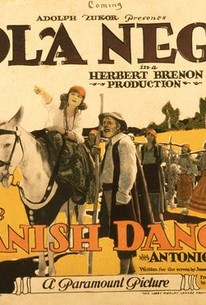 The rights to Don Cesar, the novel by Vicente Blasco-Ibanez, were originally purchased by Paramount as a vehicle for Rudolph Valentino. When he and the studio had a parting of the ways, the story was rewritten for Pola Negri, with Gypsy dancer Maritana as the lead. This was Negri's third film for Paramount, and it was released around the same time as Rosita, which starred Mary Pickford and had a very similar plot (in addition, Rosita was directed by Ernst Lubitsch, who Negri had wanted for her own film). While Rosita has managed to survive the ages, The Spanish Dancer was considered the better film at the time it came out, and no wonder -- Negri was totally believable as the exotic, temperamental dancer, whereas such a role was quite a stretch for the still-girlish-at-30 Pickford. Don Cesar de Bazan (Antonio Moreno) is about to be seized for his debts, but Maritana helps him to escape. When King Philip (Wallace Beery) gets a look at the beautiful dancer, he wants her for himself and sends his soldiers after her. Don Cesar tries to rescue Maritana, but he violates a royal edict and is sentenced to death. The double-dealing Don Salluste (Adolphe Menjou) takes Maritana to Don Cesar for a secret wedding, but after the ceremony, takes her to the king. Don Cesar, meanwhile, is saved from execution with the help of Lazarillo, a boy he has befriended (Gareth Hughes). Don Cesar winds up in a duel with the king, but the arrival of Queen Isabel (Kathlyn Williams) brings things to a head. Maritana stirs up her jealousy, which so pleases the king that he gives her and Don Cesar his blessings.

Kathlyn Williams
as Isabel of Bourbon

Charles A. Stevenson
as Cardinal's Ambassador

Robert Agnew
as Juan, a thief
View All

Critic Reviews for The Spanish Dancer

In The Spanish Dancer, Pola Negri manages to regain some of the ground that she has lost during her disastrous sojourn in Hollywood -- but she doesn't come all the way back, by any means.

There are no featured reviews for The Spanish Dancer at this time.