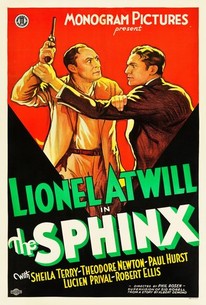 A brutal murder has been committed, and an eyewitness has placed wealthy philanthropist Jerome Breen (Lionel Atwill) at the scene of the crime. The prosecution's case hinges on the witness's insistence that Breen approached him and asked for the correct time. But the defense proves beyond a shadow of a doubt that Breen could not have spoken to anyone: Not only has the man been a mute since birth, but his vocal chords have been severed! When several more murders occur, reporter Jack Burton (Theodore Newton) begins to get suspicious, but his sob-sister sweetheart Jerry Crane (Sheila Terry) believes in Breen's innocence and even starts dating the charming, nonverbal millionaire. Only at the end of the film is Breen's horrible secret revealed -- and this could mean curtains for our heroine, who while idly playing Breen's piano has stumbled onto the most damning piece of evidence against her host. Once one of the rarest of the early-talkie "B" melodramas, The Sphinx was happily rediscovered in the mid-1970s. While the director creaks a bit, and though the romantic leads are dull as dishwater, the picture is a gem, with Lionel Atwill at the height of his villainous powers. The film was remade in 1941 as The Phantom Killer, with John Hamilton ("Perry White" on TV's Superman) inadequately cast in the Atwill role.

Critic Reviews for The Sphinx

One of those fun old-fashioned films.

Audience Reviews for The Sphinx

There are no featured audience reviews yet. Click the link below to see what others say about The Sphinx!