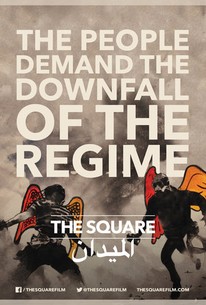 Critics Consensus: The Square offers an electrifying -- and edifying -- ground-level glimpse of life inside a real-life political revolution.

Critics Consensus: The Square offers an electrifying -- and edifying -- ground-level glimpse of life inside a real-life political revolution.

Critic Consensus: The Square offers an electrifying -- and edifying -- ground-level glimpse of life inside a real-life political revolution.

The Egyptian Revolution has been an ongoing rollercoaster over the past two and a half years. Through the news, we only get a glimpse of the bloodiest battle, an election, or a million man march. At the beginning of July 2013, we witnessed the second president deposed within the space of three years. The Square is an immersive experience, transporting the viewer deeply into the intense emotional drama and personal stories behind the news. It is the inspirational story of young people claiming their rights, struggling through multiple forces: from a brutal army dictatorship willing to crush protesters with military tanks, to a corrupt Muslim Brotherhood using mosques to manipulate voters.(c) Official Site

Tipped for an Oscar nomination, Jehane Noujaim's kaleidoscopic documentary offers a gripping, behind-the-headlines account of Egypt's 2011 Tahrir Square uprising and the complexities of its aftermath.

Noujaim's film attests to how quickly joyous weeping in the streets gave way to sectarian arguments over the army's role and fissures in promising alliances.

If the resulting film is unwieldy - five editors, five "additional editors," and six assistant editors are credited - it also brims with angry urgency.

The camera becomes a revolutionary: running, chasing, breathlessly jittery, up in the face of interrogators.

Epitomizes nonfiction film not just as a way to deepen knowledge and understanding, but also as an art form.

No revolution has ever been filmed from the inside with such intimate detail and breathtaking scope. The footage is at times horrific and heartbreaking.

An engrossing, transportive experience, but more importantly, it's a galvanizing one. The film's greatest victory isn't simply that it makes you feel like you're in Tahrir Square; it's that it makes you want to be there.

The Square is a shrewd application of cinéma vérité in the midst of mass communication and a sensible and thorough approach to the events that gave birth to the Arab Spring. [Full review in Spanish]

What it is able to do is give a vital and vibrant look at what being a part of the revolution was and is like.

A beautiful and electric documentary that captures so vividly both the rapture at the heart of the Tahrir Square protests of 2011 and the sense of betrayal that followed.

The rise and fall of political leaders in a country struggling to have civil rights is a heavy subject to tackle, but director Jehane Noujaim makes this issue easy to understand and connect to, even from watching half a world away.

The direction is not flawless, with the camera constantly going out of focus, but this essential film remains an inspiring testament to the power of protests and the voice of the people, especially in times when rebellions ought to come up everywhere against abusive regimes.

For what it is, "The Square" will attract many viewers solely based on it's true display of young adults fighting for their right to freedom in many areas of life. The imagery is brutally realistic and almost made me look away. I give props to these guys for making such a touchy film, but they pulled it off. It is a bit boring, and much of the same questions are asked and answered multiple times, but it is a very effective film that will be in my head for a while. The imagery has scarred my brain. I just cannot believe how some people in the world behave. Overall, it is a well put together film that deserves it's nominations. Displayed first through Netflix, this opened the film to many viewers around the world. I honestly cannot recommend this film, and I will never watch it again, but I admired it.

Most importantly, "The Square" brings cohesion and clarity to the story of Egypt's ongoing revolution since the Arab Spring that began nearly 3 years ago today. The film is structured into chapters of each power-shifting protest that has made its way into western media over the past few years, and we follow a few revolutionaries to get their perspectives on the reasons of each protest movement and their thoughts on the aftermath. Their words are as perceptive and inspirational as the footage shown of their fellow Egyptians, and by the end this documentary makes a cautionary and exciting case for both the future of Egypt and of ours as a global community. As Martin Luther King Jr. said, "You will never be what you ought to be until they are what they ought to be."

Much like the events being documented, the film as a whole can feel frustratingly repetitive and disorganized, but there is no denying that the raw footage provided here is unprecedented.