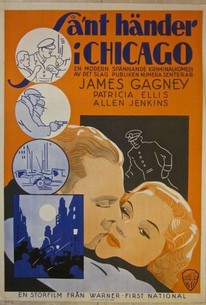 James Cagney manages to retain his pre-Code cockiness within post-Code limitations in the likeable St. Louis Kid. Cagney and Allen Jenkins, Eddie Kennedy, and Buck Willetts play long-distance truck drivers who get entangled in a battle between a crooked trucking firm and striking milk farmers (a plot thread based on actual events). When one of the dairymen is killed by a hired goon, Eddie is accused of the crime. He breaks out of jail to track down the real killer then has to rescue his girlfriend Ann (Patricia Ellis), who's been kidnapped by henchmen of the truck company. It takes a bit of clever brainwork between Eddie and Buck, but our hero manages to flummox the bad guys and rescue the girl. James Cagney's sheer star power is such that the audience is willing to forgive the fact that, in the early passages of the film, his character is nothing more or less than a "scab." St. Louis Kid is the picture in which Cagney, tired of playing characters who settle differences with their fists, hit upon the novel idea of incapacitating his screen rivals by butting his forehead against theirs, knocking them cold without laying a hand on them!

William B. Davidson
as Joe Hunter

Louise Seidel
as Girl in Car

Charles B. Middleton
as Sheriff

Joan Barclay
as Girl at Dance
View All

[James] Cagney's acting as usual is lively, perfectly timed, and as interesting to watch as good tap-dancing. But someone should write him a new story.

There are no featured reviews for The St. Louis Kid at this time.