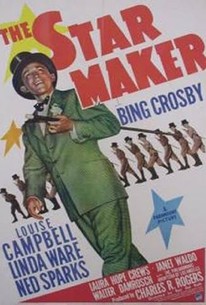 The Star Maker is the story (with variations) of vaudeville enterpreneur Gus Edwards, here played by Bing Crosby. Determining that he can attain the uppermost showbiz rungs by spotlighting new, untried talents, Edwards rises to fame by hiring preteen boys and girls for his touring acts, the most famous of which is his "schoolroom" routine. Among Edwards' more prominent discoveries were Eddie Cantor, Georgie Jessel, Bert Wheeler, Walter Winchell and Mae Murray, none of whom are depicting in the film (though composer Walter Damrosch is portrayed "By Himself"). Paramount intended The Star Maker as a showcase for a whole new crop of "stars in the making", though the studio's own discoveries were destined for obscurity--with the exception of Janet Waldo, who in 1997 was still providing the voice of Judy Jetson for a series of TV commercials. Louise Campbell provides the nominal romantic interest as Edwards' super-supportive wife, while a welcome note of cynicism is introduced by the ineffable Ned Sparks.

Walter Damrosch
as Himself

Critic Reviews for The Star Maker

Audience Reviews for The Star Maker

There are no featured audience reviews yet. Click the link below to see what others say about The Star Maker!