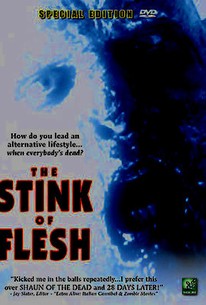 The Stink of Flesh begins with Matool managing to stay alive during the beginning of a zombie onslaught thanks to his hand tools. He eventually discovers Dexy and Nathan, a couple who, when not killing zombies in order to survive, engage is a series of experimental sex acts. The three team up in more ways than one, but their group slowly begins to take on new members until there is an unhealthy amount of jealousy, fear, and paranoia. ~ Perry Seibert, Rovi

Critic Reviews for The Stink of Flesh

There are no critic reviews yet for The Stink of Flesh. Keep checking Rotten Tomatoes for updates!

Audience Reviews for The Stink of Flesh

Odd indepenently made Zombie movie set in a zombie infested New Mexico where a quirky group of survivors endure their bleak existance among the living dead. It's all low-budget stuff but it delivers adequate amounts of blood and gore, sex and nudity and action. The attempts at humour are hit and miss, mostly the later, and some of the characters and their behaviour are just too weird. It's got too many flaws for an out right recommendation, but there's never a dull moment so some may find it entertaining.

"So Fucked Up" highlight: main pretty boy character "rapes" a big breasted playboy bunnyish zombie that he keeps in a shed as a pet/sex object (can zombie sex be consensual?)

The Stink of Flesh Quotes