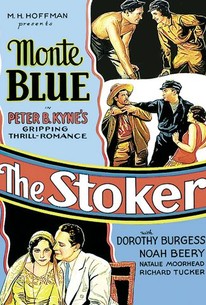 Just before his demotion to the ranks of minor character actors, Monte Blue starred in an above-average series of programmers for Allied Pictures (one of the many forerunners of Monogram). In The Stoker, Blue plays Dick, a wealthy young man who is betrayed by his faithless wife Vera (Natalie Moorehead). Dropping out of sight, Dick goes on the bum along the waterfront, eventually landing a job as a ship's stoker on a vessel bound for South America. He ends up on a below-the-border plantation, where he rescues the pretty owner (Dorothy Burgess) from the skullduggery of bandit leader Santono (Noah Beery Sr.) For an actor who was considered a has-been, Monte Blue gives a persuasively virile performance, though he's a bit thick in the middle to be thoroughly convincing as a "young" hero.

Chris-Pin Martin
as Chief of Police
View All

Critic Reviews for The Stoker

There are no critic reviews yet for The Stoker. Keep checking Rotten Tomatoes for updates!

There are no featured reviews for The Stoker at this time.