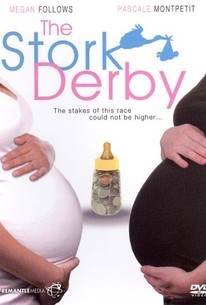 Based on a true story, the Canadian TV movie The Stork Derby begins with the death of wealthy Toronto lawyer and lifelong bachelor Charles Vance Miller (Frank Fontaine). Going through Miller's effects, his lawyers discover that he intended to divide his fortune among the Canadian women who would deliver the most babies within a decade after his birth. Fueled by the circulation-hungry Toronto Daily Star, "The Great Toronto Stork Derby" held the Dominion in thrall throughout the Depression years, with hundreds and thousands of women hoping to escape the ravages of the Depression via mass procreation. The contest boils down to three front runners: French-Canadian Vivanne Kennelly (Pascale Montpetit), whose anxiousness to win at all costs leads to tragedy; Colleen Brant (Janine Thierault), who has multiple babies by multiple fathers; and Gina Bonaggio (Ellen David), an impoverished Italian immigrant. Dutifully chronicling each twist and turn of the contest is Canada's only female journalist Kate Harrington (Megan Follows), who at first regards the whole affair as demeaning to women, but ultimately becomes an ardent crusader for fair play when, during the 1938 court trial that will determine the winner, it becomes painfully obvious that the Canadian government will succumb to traditional colonial bigotry and see to it that no "inferior" women--that is, non-white non-Protestants--will benefit from Miller's legacy. Adapted from a book by Elizabeth Wilton, The Story Derby made its CBC debut on January 8, 2002, and shortly thereafter was shown in the U.S. courtesy of the Lifetime cable network.

Robin Wilcock
as Bennet
View All

Critic Reviews for The Stork Derby

There are no critic reviews yet for The Stork Derby. Keep checking Rotten Tomatoes for updates!

There are no featured reviews for The Stork Derby at this time.