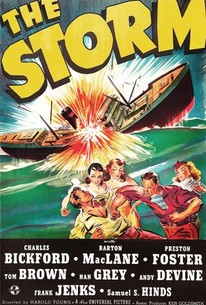 The Storm is standard hard-guy stuff starring three of Hollywood's hardest: Charles Bickford, Barton MacLaine and Preston S. Foster. The film is set aboard a ship, where hostilities run high between two radio operators who happen to be brothers. During the climactic storm at sea, however, everyone pulls together to survive the ravages of Mother Nature. Universal contractees Nan Grey, Tom Brown and Andy Devine weave in and out to temper the steroid level of all those he-man goings on in the radio room. The Storm ran 75 minutes, allowing it to run as part of a double bill or as the solo feature depending on the whim of the exhibitor.

Critic Reviews for The Storm

The picture is worth seeing to anyone who wants thrills in his screen entertainment. It's one of those good Class B stuffs.

This is very manly stuff -- full of brawls and sinking ships and explosions and icebergs and virile love. And good too.

There are no featured reviews for The Storm at this time.