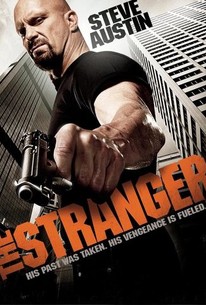 His family killed and his memory erased, a former member of an elite FBI task force wages a one-man war to reclaim his past in this explosive action thriller starring Steve Austin. With the Russian mob and the FBI closing in on both sides, The Stranger realizes that in order to re-discover his true identity, he'll have to fight for his life while gathering the pieces of an elaborate, and deadly, puzzle. He can't be caught, and he won't be broken. Now with each life he takes, The Stranger comes one step closer to finding out where he came from, and why so many people want him dead.

Steve Austin
as The Stranger

John Tench
as Bartender
View All

Critic Reviews for The Stranger

There are no critic reviews yet for The Stranger. Keep checking Rotten Tomatoes for updates!

Audience Reviews for The Stranger

I had the HUGE expectation that this would be worth my while...I was sorely disappointed....a cat and mouse chase that leaves you hanging in the end...of a very long list of expectations for better films from "Stone Cold" (((((LMAO)))))

Former WWE superstar turned action star STONE COLD STEVE AUSTIN, stars as a man on the run from the Police, FBI, The Russian Mafia and his psychiatrist named Grace Bishop (Erica Cerra). Austin spends much of the movie trying to figure out who he is and we are bombarded with flashbacks mostly centered on his wife and daughter apparently being killed while he's mixed up in some dangerous sting operation involving millions of dollars. Austin discovers he can't trust anybody, especially many of those who are attempting to "help him" because they have other agendas on their mind. I thought Steve himself was pretty good speaking in Russian, Spanish and English and just being an all-around decent lead but there's not much to say beyond that as we're teased with these blurry, quick flashbacks that pretty much dominate the film and only succeeded in annoying me. This is mostly a psychological drama/thriller that would probably be enjoyed by dedicated Stone Cold Steve Austin fans.

An explosive and riveting action-thriller. A cool, hard-edged and relentlessly exciting movie that's loaded with hard-hitting action and searing suspense. A surprisingly effective, very entertaining and sensational independent film. The suspense snaps and sparks like live wire and has you guessing right to the very end. A mind-breaking action-packed ride. Steve Austin is terrific. Adam Beach is excellent.