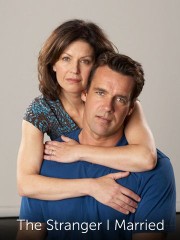 The Stranger I Married

The Stranger I Married Reviews

Bogumila D
March 13, 2009
The main reason was David James Elliott who is similar to Michael Weatherly. The film was broadcast after the NCIS episode, otherwise I probably wouldn't never saw it.

William R
December 13, 2008
The only real reasons why I watched this were: 1. Nothing else was on the television and 2. David James Elliott was in it and I have not seen him in anything since JAG. Not a bad movie. I was entertained for a couple of hours. A somewhat interesting story about a guy who literally loses himself.

sambath m
½ November 29, 2008
Starting was good but the director lost his way at the end

Jonathon N
September 6, 2008
Several unexpected plot twists. ... If you like being critical, you could complain that parts of it have the appearance and script of an After School Special, but ... to be honest, ... it's compelling, emotionally engaging, truthful, insightful ... it grew me.
[spoiler alert]
favourite line (from memory): > i want the man you were.
> Terry's gone. he's dead. he died on the highway. he's dead and he's not coming back.
> i can't stand having you look like him but - you're not him.
> My name's Terry Evanshen, but I'm making him up every day. Let him die. Let me live.
...
[later]
...
are you asking me on a date? ... who exactly is it that you're wanting to date?
...
at daughter's wedding:
i opened my eyes and didn't recognize her, but it wasn't long until i was opening them and hoping she'd be there.
i'm hoping that tracey and joy have the kind of love that i have had, for as long as i had
...
i almost forgot something. let's her see cue card - i'm supposed to kiss you and leave you breathless.
.
-----
you don't need to be dealing with an acquired brain injury to relate to this film. this isn't the first story of spouses forgetting who they really are.
...
...
other scenes: the dinners, returned
the notecards
the speech, the ballgame

Super Reviewer
Ida K
October 20, 2007
David James Elliott is so handsome in the TV series "Jag" but he was creepy in this movie.
Page 1 of 1