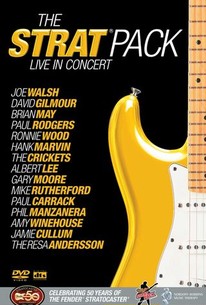 In 1954, Leo Fender gave the electric guitar a new sound and look that fully set it apart from its acoustic counterpart with the invention of the Fender Stratocaster, a solid-body electric axe with a revolutionary three-way pickup system and a modern, streamlined design that was like nothing else on the market at the time. Early rock 'n' rollers such as Buddy Holly and Dick Dale quickly embraced the Stratocaster, and since then it has become the guitar of choice for legendary players such as Jimi Hendrix, Eric Clapton, Stevie Ray Vaughan, Keith Richards, Bonnie Raitt, Mark Knopfler, and dozens of others. The Strat Pack: Live in Concert documents a special concert held at London's Wembley Arena in the fall of 2004, in which a stellar lineup of great rock guitarists came out to say "Happy 50th Birthday" to the Stratocaster. Performers include Joe Walsh, Ron Wood, David Gilmour, Brian May, Albert Lee, Hank Marvin, and many more.

Critic Reviews for The Strat Pack: Live in Concert

There are no critic reviews yet for The Strat Pack: Live in Concert. Keep checking Rotten Tomatoes for updates!

There are no featured reviews for The Strat Pack: Live in Concert at this time.