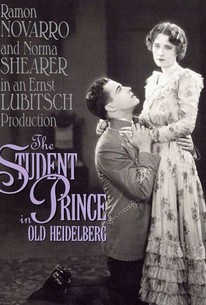 Even without the benefit of sound, The Student Prince in Old Heidelberg seems to be inundated by Franz Lehar's unforgettable songs. Director Ernst Lubitsch fashioned a gloriously schmaltzy, delightfully artificial rendition of the 1924 Lehar opera, which in turn was based on the 1902 play In Old Heidelberg. Ramon Novarro plays the title role, an ever-carousing young monarch who falls in love with ebullient barmaid Norma Shearer. Fully willing to forsake his crown for her sake, Novarro chooses duty over love when his country is threatened with revolution. He tries to let Shearer down gently, but it is clear that she will never quite get over her summer romance. Such is the genius of Ernst Lubitsch that the 1927 version of Student Prince seems a lot more alive and far less dated than the 1954 Technicolor remake.

Lincoln Stedman
as Student
View All

It is light and artificial, but it preserves its lightness, and it never tries to be any thing else but artificial.

Its cutesy love story is too schmaltzy.

Ernst Lubitsch's graceful silent comedy is both a class act and a still-relevant model for emulation.

an early lubitsch film of the famous operetta. lucky for me it's the silent version ;) some beautiful sequences, especially the night scene in a meadow, and typical lubitsch humor moving the plot along. ramon novarro was very sweet as the prince! i haven't seen him before tho i understand he became quite famous as the new 'latin lover' after the death of valentino. norma shearer is ok but i thought she was miscast in this. at least i didn't have to hear them sing :p