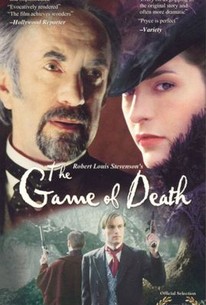 Roger Corman revives his tradition of bringing low-budget literary adaptations to the screen with this stylish reworking of Robert Louis Stevenson's The Suicide Club, directed by Rachel Samuels. Lev L. Spiro strips the book down to its essence while also devising subplots that are not in the original work. Set in 1899, Henry Joyce (David Morrissey) is on the brink of suicide after losing the great love of his life. His buddy Captain May (Neil Stuke) calms him down some, but soon both find themselves under the spell of an equally suicidal Shaw (Paul Bettany), who leads them to The Suicide Club, run by the shadowy Bourne (Jonathan Pryce). The rules of the Suicide Club are simple: the members, all well-bred citizens with a penchant for death, decide the murderer and victim from a draw of the cards. Bourne quickly and ruthlessly dispatches with those who do not want to abide by the rules. Soon Henry finds himself sucked into this underworld with no chance of escape.

Neil Stuke
as Capt. May

Critic Reviews for The Suicide Club

There are no critic reviews yet for The Suicide Club. Keep checking Rotten Tomatoes for updates!

There are no featured reviews for The Suicide Club at this time.