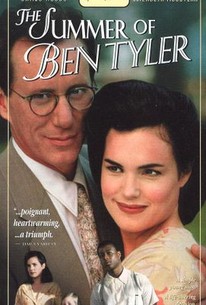 The Summer of Ben Tyler Photos

A man who acts upon his conscience opens a Pandora's box of racism and intolerance in this made-for-TV drama. Temple Rayburn (James Woods) is an attorney who lives and works in a small Southern community in the 1940s. When Rayburn and his wife Celia (Elizabeth McGovern) encounter a young man named Ben Tyler (Charles Mattocks) -- an African-American youth who is retarded and has nowhere to go -- they take pity on him and allow him to stay in their home. However, at a time and place when black and white citizens were not allowed to use the same drinking fountains, Temple's decision raises more than a few eyebrows, and the Rayburn household soon becomes the center of a local political firestorm. The Summer of Ben Tyler was originally aired as part of the award-winning anthology series The Hallmark Hall of Fame.

Judith Ivey
as Narrator
View All

Critic Reviews for The Summer of Ben Tyler

Depicts the challenges of a lawyer with principles and a belief that it is always important to do the right thing.

There are no featured reviews for The Summer of Ben Tyler at this time.

The Summer of Ben Tyler Quotes