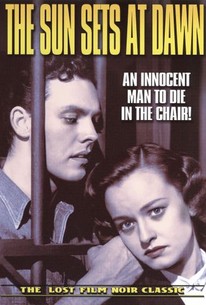 The Sun Sets at Dawn Photos

The Sun Sets at Dawn is a crime melodrama with strong religious overtones. The Boy (Philip Shawn) is about to be executed in the State's brand-new electric chair. On this momentous occasion, dozens of reporters gather around as The Boy tells his sad life story. While this is going on, the person who should be electrocuted is exposed, and it is suggested that a Divine force has brought about this last-minute miracle. Sally Parr co-stars as The Girl, who believes in The Boy's innocence (the characters have no names; this, evidently, is meant to be symbolic). Walter Reed also appears as The Chaplain, who has ever so much to say. The Sun Sets at Dawn represents the return after a lengthy retirement of director Paul H. Sloane, who also wrote and produced.

Philip Shawn
as The Boy

Sally Parr
as The Girl

Howard St. John
as The Warden

Walter Reed
as The Chaplain

Louise Lorimer
as The Warden's Wife

Raymond Bramley
as The Deputy Warden

Perry Ivins
as Forty-Six
View All

Critic Reviews for The Sun Sets at Dawn

As B-films go, this one is above average.

Audience Reviews for The Sun Sets at Dawn

There are no featured audience reviews yet. Click the link below to see what others say about The Sun Sets at Dawn!

The Sun Sets at Dawn Quotes