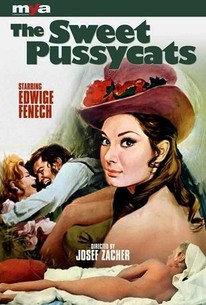 French beauty Edwige Fenech stars in this racy German comedy concerning a count and a colonel who live on opposite sides of the same castle, and who enter into a lecherous competition to determine the rightful owner of the sprawling estate. Count d'Alsay (Ernst Stankovski) and Colonel Delaroche (Sieghardt Rupp) both claim ownership of the castle, and neither are willing to budge. When Count d'Alsay and Colonel Delaroche each a new virgin made, they make a pack that the first man to bed his respective new employee will also become the sole owner of the property. Frustrated that her future husband is ignoring her advances, Colonel Delaroche's lusty fiancée (Fenech) instead turns her affections toward another officer. Meanwhile, a stable of local prostitutes joins in on the bawdy fun. ~ Jason Buchanan, Rovi

Critic Reviews for The Sweet Pussycats

There are no critic reviews yet for The Sweet Pussycats. Keep checking Rotten Tomatoes for updates!

There are no featured reviews for The Sweet Pussycats at this time.