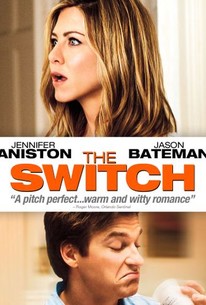 Critics Consensus: The Switch has an interesting premise and a charming cast; unfortunately, it also has a trite script that hews too close to tired rom-com formulas.

Critics Consensus: The Switch has an interesting premise and a charming cast; unfortunately, it also has a trite script that hews too close to tired rom-com formulas.

Critic Consensus: The Switch has an interesting premise and a charming cast; unfortunately, it also has a trite script that hews too close to tired rom-com formulas.

"The Switch," is an offbeat comedy about Kassie, a smart, fun-loving single woman who, despite her slightly neurotic best friend Wally's objections, decides it's time to have a baby-even if it means doing it by herself- with a little help from a charming sperm donor. But, unbeknownst to her, Kassie's plans go awry because of a last-minute switch that isn't discovered until seven years later when Wally finally gets acquainted with Kassie's precocious-though slightly neurotic-son. From the people behind "Little Miss Sunshine" and "Juno" comes "The Switch," due in theaters this summer.

Will Swenson
as Actor on Stage

Lily Pilblad
as Girl at Pizzeria

News & Interviews for The Switch

View All The Switch News

Critic Reviews for The Switch

Despite a strong cast and technical specs, The Switch remains another easily disposable entertainment built out of the rubble of a promising literary prospect.

You have to overlook a whole lot of guff in order to enjoy the slight but pleasurable entertainment of The Switch.

On some level, Wally is acting out on his deep feelings, and what he's doing to his "friend" is a violation of her dignity not far removed from rape.

Let down by inconsistent characterisation and finally ending in gloopy sentimentality and silliness.

It strains to portray a progressive modern woman, but Aniston's role is the weakest link.

There's an interesting story in there somewhere about nature and nurture, and the pros and cons of being clever or merely good-looking.

The dialogue is hilarious, moving swiftly with a prattling Grant-Hepburn feel, despite a completely unnecessary, nearly unrecognizable voiceover narration.

It does manage to rise above the mediocrity that has defined 2010's romantic comedies.

Jennifer Aniston and Jason Bateman are well-paired in this awkwardly endearing rom-com with an artificial-insemination twist.

Not the traditional stereotype of family but a love story of the best proportions. Switch on THE SWITCH.

The Switch is packaged as a romantic comedy, but it's neither romantic nor comic. It's one of those movies that's trying to be cheerful but is secretly dour and misanthropic. It's like being stuck on a bad date with Jennifer Aniston...

While Aniston gets stuck playing an undercooked neurotic cipher, Bateman knocks it out of the park with his physical clowning and easy-breezy bonding scenes with newcomer Thomas Robinson.

Audience Reviews for The Switch

Jason Bateman delivers a surprising performance of wistful need. Wally's big reveal moment isn't some gooey gesture, buoyed by a sappy indie song or romantic precipitation. It's a completely inopportune moment that he wedges into the works. As David Henry Hwang said at the NYC AWP Conference in 2008: "Monologue is to burst." And Bateman certainly bursts. Of course, I am sorely disappointed with Aniston's reaction. She looks everywhere except at Bateman, and I, not having read Jeffrey Eugenides's short story, "Baster," don't know if Kassie's go-to angry reaction is in the original or just stuck in for the typical crisis-near-the-end-of-movie-that-will-be-resolved-in-two-minutes effect. I kept wanting to rewrite the whole scene. Give Kassie a real moment, perhaps saying she knew, somewhere in the back of her mind, she knew. I mean, how could she not? The kid moans when he eats. The rom-com marketing and easygoing, devoid-of-personality female lead take away some of the charm and pathos of Wally's connection with the mini-him of sorts. Thomas Robinson is definitely the most adorable child-depressive ever. The scene in which Sebastian describes his picture-perfect paternal family and Wally reveals his own baggage is absolutely heartbreaking.

Wally Mars: I - - um, hijacked your pregnancy. "The most unexpected comedy ever conceived." The Switch is a pretty dull, unfunny, and overall difficult movie to watch. The only thing that keeps the movie flowing and kept me from turning it off was Jason Bateman, who was actually pretty good, and a great little performance from the kid. Other than that, the story is so-so, the dialogue so-so, and nothing really interesting happens to support the initial premise. The premise is one that could work, but it just didn't. Wally and Kassie are best friends and have been for quite some time. Kassie begins feeling like she's over the hill and wants to have a child while she still can. So in this haste she decides to try to find a sperm donor, so she can have the child she wants and needs right now. When she throws a party on the night where it will all take place, Wally stumbles into the bathroom drunk after the donor did the deed into a cup. Wally spills the cup and decides to replace it with his own. He completely forgets about this until Kassie and her son return to New York after years of being away.  Not that I expected much from this, but it was still a big disappointment. We know from the beginning where the story is going to go, we know how it will end, and we know the ups and downs the characters will take. So why watch it? I don't know why I did, but I'm just warning you so you don't make the same mistake I did.

It's predictable awkward situation drama. But I can still enjoy it.

This was very predictable but I enjoyed it.