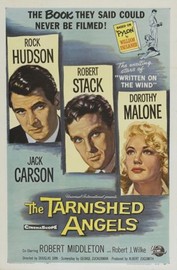 Paul J
April 22, 2009
Sirk is most famous for his "woman weepies." This is an exception. It also happens to be his best film. Clean and effortless storytelling with memorable characters. However, it's the unforgettable black and white cinematography that lingers long after the film is over. It has a nostalgic feel not that different from The Last Picture Show. Tarnished Angels remains an underrated gem that exists in unpretentious perfection.

Michael D
March 3, 2009
good story, nicely made. one would expect a bit better acting from THE cast, especially after 'written on the wind', but it's still an interesting film.

Yeah that sums up this movie! Really cheesy, corny 50's melodrama. It was funny seeing the siblings from 'Written on the Wind' as a couple, and Rock Hudson in a flawed role, but otherwise, this was boring, and dumb!

Frances G
½ July 31, 2008
Dorothy Malone is fabulous in this film - especially her hair. She also does a parachute jump from a plane flown by Robert Stack and is wearing high heels. Love it. Not Sirk's best film, but lots of camp, lots of Rock Hudson with a pouty face and, as usual, a seering critique of mid-America. This time in the Depression.

Courtney S
½ July 13, 2008
In the context of Douglas Sirk, Rock Hudson and melodrama this movie struck me thusly: Huh?

James H
May 22, 2008
The Tarnished Angels - Lost souls seek to sell the American capitalistic adverture in several forms, those in early flight and those in the 'free' press. Everybody in this films wears their masks to get through the day all the while holding up some ideal vision which becomes an ever fading mirage. This is the masterpiece Tarnished Angels. The camera charts the dymantic the four central characters create. Embodied masterfully by Rock Hudson(in purhaps in best performance), Robert Stack, Dorathy Malone and Jack Carson. They have long formed their figurative barriers in the roles they perform for the crowd and in the end it kills the one they love the most. One woman finds escape from a destructive legacy which has nearly destroyed everything for her. I so love Sirk: Melodrama at it's finest.

Jerome W
March 13, 2005
So here we are at March 13th, the day I turn 50. Overall I should be really depressed right now considering the lack of stuff I've accomplished in my life but since I think I finally have things figured out and know the direction I shuld go in, I don't feel too bad. I just have to hold on until I go to my little retreat at the end of April. I notice there are a lot of gorgeous, sexy women who have their birthdays around now like Sharon Stone, Nina Hartley and Dana Delaney who turns 49 today. I'm at least in very good company.
One thing is that there's still an awful lot of important films I haven't seen. At my age I should be farther along and I'll be working on that from this point on.

The most confounding film I've seen lately has been "Broken Lizard's Club Dread". I had been wanting to check these guys out but now I'm confused as to what I saw. This wasn't a spoof of slasher movies so much as a slasher movie with jokes. It didn't help that the entire cast played the script so seriously the humor mainly fell flat even when it was obvious. Now I probably have to see "Super Troopers" to try to figure out these guys.

Later today, I'll celebrate after a fashion by eating out, then come back home and watch "Valerie And Her Week Of Wonders", which hopefully will be as mind-blowing as I've heard.

Review for this and [b]The Bride Wore Black[/b] tomorrow. Because then I'll be done with finals and home from school. Needless to say, I think this is my favorite Sirk film so far.
Page 2 of 2