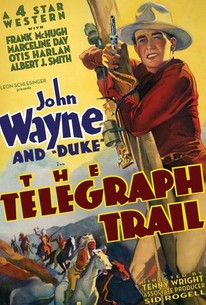 Directed by Tenny Wright, The Telegraph Trail features John Wayne as John Trent, a calvary scout who has been sent to put a stop to sleazy opportunist Gus Lynch's (Albert J. Smith) crooked business dealings. Lynch (Smith) has convinced High Wolf (Yakima Canutt), a local Native American tribe leader, that his people must delay the completion of the first transcontinental telegraph line unless they wanted their entire tribe to be wiped out by the consequent influx of white men. This action, which only benefits Lynch's (Smith) greed, creates an uprising from the Native Americans that results in the harm of the men working on the construction of this historical telegraph system. Luckily, the injustice doesn't last for long once Trent (Wayne) comes to town. The Telegraph Trail also features actors Frank McHugh and Otis Harlan, as well as actress Marceline Day.

Jack Kirk
as Man in Store

Critic Reviews for The Telegraph Trail

Duke, the Miracle Horse, does a better acting job than most of the supporting cast.

There are no featured reviews for The Telegraph Trail at this time.