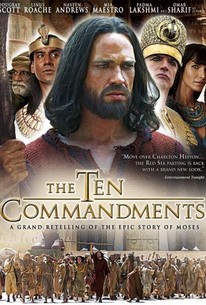 Dougray Scott, Linus Roache, Omar Sharif, and Naveen Andrews headline this epic mini-series from director Robert Dornhelm, and following the Prince of Egypt as he discovers his true identity and sets out on a mission from God. An oracle has prophesized that a child will grow up to become the Prince of Egypt, and in order to prevent this from happening The Egyptian Pharaoh (Paul Rhys) orders the immediate slaughter of all newborn males. No child in the entire kingdom is spared except for one. His name was Moses, the son of a Hebrew slave. Set adrift on the Nile immediately after he was born, Moses escapes certain death and enjoys a lavish upbringing in a royal Egyptian household. Moses has no memory of his past, and soon rises to the rank of prince. After Moses receives a fiery message from God and learns of his true heritage, he vows to reclaim his destiny by delivering his people from persecution and realizing his fate as the liberator of the Hebrews.

Critic Reviews for The Ten Commandments

There are no critic reviews yet for The Ten Commandments. Keep checking Rotten Tomatoes for updates!

Audience Reviews for The Ten Commandments

There are no featured audience reviews yet. Click the link below to see what others say about The Ten Commandments!