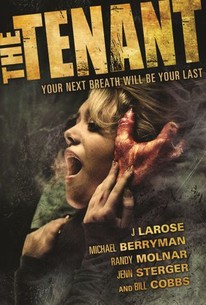 A simple man, Dr. Walter Newman has high aspirations to cure all disease through genetic manipulation. His obsession with his mission draws him deeper into his own dark world, distracting him from his wife Olivia and from his responsibilities to his patients at the Edgewood Asylum. The doctor's loyal but diabolical nurse, Ms. Tinsley, decides to take matters into her own hands and in secret she conducts her own experiment. When Dr. Newman realizes what has been done, a deformed creature that defies nature is created. Part human, part nightmare. Dr. Newman knows what he must do, but is it already too late? --(c) Official Site

Justin Smith
as Rob
View All

Critic Reviews for The Tenant

As flawed as it is, The Tenant does deliver the main draw for a slasher movie -- blood 'n guts -- but genre fans might be hard-pressed to stick around waiting for it to appear.

Audience Reviews for The Tenant

There are no featured audience reviews yet. Click the link below to see what others say about The Tenant!