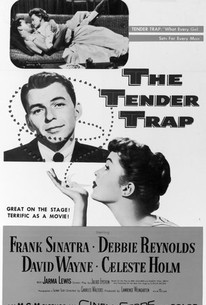 Max Shulman and Robert Paul Smith's Broadway hit The Tender Trap is transformed into a beguiling Frank Sinatra film vehicle. Sinatra plays a Manhattan showbiz agent, Charlie Y. Reader, who enjoys the attentions of several willing young ladies. At an audition, Charlie meets aspiring actress Julie Gillis (Debbie Reynolds), who is so determined to land a husband that she's already set the date. She goes out with Charlie for a short while, then announces that she won't marry him until he gives up all his other girls. Charlie, who hasn't said word one about marriage and who'd been preparing to give Julie the brush-off, is startled by her ultimatum -- so much so that he genuinely falls in love with her, which (we can safely assume) was her intention all along. A complication involving Charlie's former amour Sylvia Crewes (Celeste Holm) and his best friend Joe McCall (David Wayne) paves the way for the film's slightly offbeat denouement. In addition to scoring at the box office, The Tender Trap yielded a hit song (written by Sammy Cahn and Jimmy Van Heusen), which would remain a part of Frank Sinatra's repertoire for the rest of his life. ~ Hal Erickson, Rovi

Critic Reviews for The Tender Trap

A disappointing dated and flat romantic comedy from the 1950s.

...makes a convenient time capsule for the fifties, and at its best it's an amusing romp.

Would-be-hip look at a swinging single in NYC

Audience Reviews for The Tender Trap

So incredibly terrible, and Debbie Reynolds knew it. Julie, her naïve husband-chaser of a character, was and perhaps is a reality and a trope, but does she have to be so devoid of personality otherwise? What is love, and why does Charlie even fall in love with her? There's no charm to their dated courtship at all, and it's a waste of Debbie's singing and dancing talents. The bouquet passing bit at the end is cute, and the movie makes interesting enough insights into Martian and Venusian conflicts with Charlie's reforming rover, Joe's disillusioned family man, and Sylvia's career dame with a ticking marriage clock (played by the serene Celeste Holm), but the injection of a petty, needy, indecisive stereotype just sets gender politics back fifty years...not to mention screenwriting.

Pleasant but unspectacular comedy, Celeste Holm and David Wayne are wonderful and Sinatra is fine but Debbie's character is annoying and someone who anyone with any sense would run away from quickly.