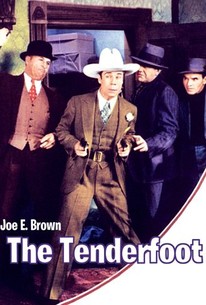 George S. Kaufman's sturdy stage comedy The Butter and Egg Man was the inspiration for no fewer than four Warner Bros. talkie versions. The first of these was The Tenderfoot, starring Joe E. Brown as a wealthy but naive cowboy alone in the Big Apple. The producers of a down-and-out musical revue hope to convince Brown to put his money in their show, sending out cute chorine Ginger Rogers as the "convincer." After having his heart broken a few times and tangling with gangsters, Joe comes through and the show goes on. Warners followed The Tenderfoot with a 1937 musicalization of Butter and Egg Man, Dance Charlie Dance; this in turn was remade as An Angel From Texas in 1942. The final variation on this theme (so far!) was Three Sailors and a Girl (53).

Joe Barton
as The Hebrew

Edith Allen
as Tart at Depot

Lee Kohlmar
as Waiter
View All

Critic Reviews for The Tenderfoot

Audience Reviews for The Tenderfoot

Joe E. Brown lays it on pretty thick as a yokel come to the big city but the movie is innocuous enough.